ROHM Semiconductor Headquarters Factory (Kyoto City) recieved the "Chairman's Award, Japan Greenery Reserch and Developing Center" in Greening Excellent Factory Award System fiscal 2021( known as "National Award for Greenery Factory") sponsored by the Ministry of Economy, Trade and Industry.This award aims to further promote the greening of factories, and recognizes factories, groups and individuals who have greatly contributed to improving the environment around the company's premises.
The award has been held every year since 1982 under the management of the Japan Greenery Center, sponsored by the Ministry of Economy, Trade and Industry, and this is the first time that the ROHM Group has received the award.
Moreover, following points were highly evaluated, and we became the first company in Kyoto City to recieve this award.
・While there are few green spaces in the urban area of ​​Kyoto, ROHM has been promoting greening for many years, and its area has increased more than 10 times.
・Various trees that color the four seasons have been planted and maintained firmly, creating an attractive space where you can feel the beautiful scenery and nature. 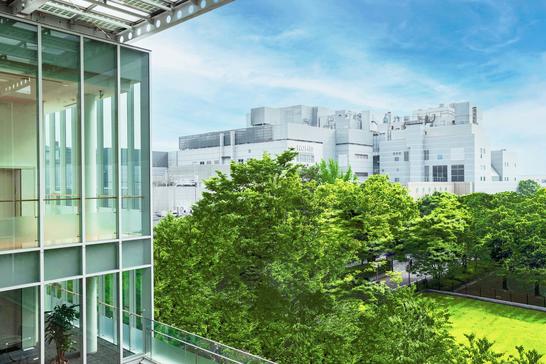 < ROHM Greening Activities and the Background>
ROHM has been headquartered in the same location since 1961. As the scale of the business expanded, the site and factories also grew little by little, but with the desire to "always value the relationship of trust with the local community", we feared that the increase in inorganic factories would damage the townscape, and in the 1980s we began greening around the head office based on the concept of "factory in the forest". In addition, we develoed a part of the site facing the road are maintained as part of the sidewalk, and metasequoia, zealwood, and yamamomo trees are planted as street trees. The area around the factory is surrounded by trees, and the surrounding public roads have become tree-lined roads that can be enjoyed by the local community. In 1995, ROHM illumination was launched to make the local people feel bright even in the winter season when flowers and flowers fall. Today, they can enjoy the scenery of the four seasons, with cherry blossoms and fresh green in spring, lush greenery in summer, golden tree-lined roads in autumn, and beautiful street trees with warm lights in winter.

< Future Initiatives Aimed at Symbiosis with Nature>
"Factory in the forest" is harmony with nature. Many trees lining the streets provide resting places for birds and homes for living things, providing a forest for plants and animals to live in within the city.ROHM Group recognizes that it is able to conduct business activities due to the blessings of nature created by biological diversity, and sees passing the global environment onto the next generation in good condition to be its responsibility. "Factory in the forest" is an initiative aimed at harmonizing with the natural circulation, and the many tree-lined avenues that continue have become forestous areas in cities where flora and fauna can live, such as resting birds and living things. Recognizing that ROHM Group has received various benefits from the natural blessings created by the earth's biodiversity, as well as the resources and energy necessary for its business activities, ROHM Group will continue to actively engage in activities aimed at harmonizing with the natural cycle in order to pass on the global environment to the next generation in a better state.